Charles Webster investigates the attitude of Paracelsus (1493–1541) to the Jews and Jewish culture and presents him not anymore as an alleged Antisemite, who followed the general trend of the 16th century, but as a Philosemite, which was what boosted his reputation in the more tolerant 17th century. Nicolette Mout acquaints readers with the Dutch humanist Jacobus Typotius (1540–1601 or 1602), predominantly with his activities at the court of the emperor Rudolph II in Prague, with his three-volume work Symbola Divina et Humana Pontificum Imperatorum Regum and with the posthumously published De Hierographia, edited by Jessenius. Martin Steiner scrutinises Comenius’s attitude to the Christian denominations of his age: to the individuals from other churches as well as to the doctrinally and orthopractically identified institutions themselves. Ágnes Dukkon examines the Latin-English Grammar Fax Nova Linguae Latinae of Pál Jászberényi, a Hungarian follower of Comenius, and finds therein citations from his mentor’s Didactica magna as well as parallels with the textbooks Janua linguarum and Vestibulum. Danilo Facca analyses a manuscript commentary to the Nicomachean Ethics penned by Adam Burski (1562–1611), finds pedagogical post-Ramist method as well as systematic and metaphysical ambition therein, and in this way he demonstrates the general tendencies of the late Renaissance philosophy in Poland. Martin Svatoš presents, examines and interprets manuscript material, containing among other documents the lists of proscribed books as confiscated in the spring of 1733 by the Jesuit missionary Antonín Koniáš in the Opočno estate; a record of the examination (Hradec Králové, 1734) of Mikoláš Doubrava, the probable head of a local group of non-Catholics, is included as an appendix. Noemi Rejchrtová reminds the historian, theologian and also Comeniologist Amedeo Molnár (1923–1990), summarizes his methodical approach and his results, especially in the field of “medieval heresy” (the Waldensian history), and finally labels him as “unclassifiable”. Ferenc Postma and Marta Bečková put forth a new historical material: a hitherto unknown letter of recommendation for two students from the Unity of Brethren at the University of Franeker. Howard Louthan presents a recent overview of Rudolfine literature.

The book has been sold out. 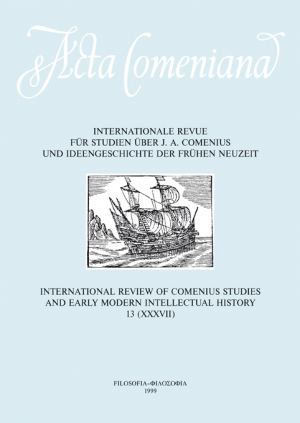