The volume of Acta Comeniana 14 (XXXVIII) comprises seven articles devoted to Comenius and early modern intellectual history, one newly discovered Comeniological material and an extensive book review section. The texts are in English, German or French.

Philipp Ther analyses the early modern historiography of Silesia and shows that there was a national consciousness in this region not only throughout the Habsburg period, but also beyond. Radek Fukala explains the interesting and peculiar political line (most especially in the time of the Bohemian revolt 1616–1620) of the Moravian political representative Charles the Elder of Žerotín (1564–1636). Anna Mištinová compares the Ianua linguarum of the Irish Jesuit William Bathe with its twenty years younger (and more perfect) sister, Janua linguarum reserata of Jan Amos Comenius. Petr Dvořák uncovers the pre-Leibnizian roots of the (theo)logical concept of the possible worlds in the monumental logical work Theologia Rationalis (1654) of Juan Caramuel von Lobkowicz. Having her research based on the seventeenth-century estate inventories from the Prague New Town, Olga Fejtová traces the development of the interests of its burghers under the influence of the post-White Mountain social and political changes. Hedvika Kuchařová deals with Dominican education in Bohemia in the 17th and 18th centuries and discusses the role of Dominicans in the education of laymen, along with Dominican quarrels with the University and with the Jesuits. Věra Schifferová focuses on Jan Patočka’s approach to the problem of characterizing Comenius’ thought and deals with Patočka’s significant conclusions gained from the comparison of Comenius with Cusanus, Bacon and Descartes. Jean Caravolas reports a new finding of the hitherto unavailable edition of the famous Comenius’ textbook under the title Janua aurea reserata (Toulouse, 1645). 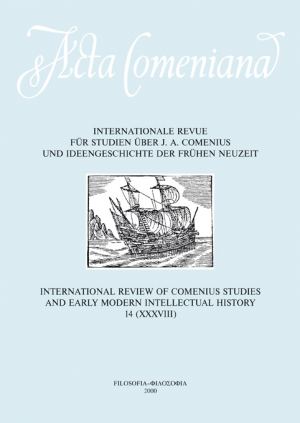