The volume of Acta Comeniana 17 (XLI) comprises seven articles devoted to the intellectual history and history of philosophy of the seventeenth century and, moreover, puts forth new Comeniological materials and research reports. The volume is also supplemented by an extensive review section and obituaries of Alexandr Stich (by Martin Svatoš) and Franz Hofmann (by Dagmar Čapková). The contributions are published in English or German.

Guido Giglioni deals with Francis Bacon’s hylozoist considerations on matter, their reception in Comenius’ works and their theological consequences. Julian Kümmerle outlines the important role of the three Lutheran scholar families Andreae, Bidembach and Osiander for the educational, religious and social history of the Duchy of Württemberg in the Holy Roman Empire between the sixteenth and the eighteenth centuries. Jaroslav Miller analyses the character and development of the Palatine myth in England under the reign of James I Stuart. Hans-Joachim Müller describes Comenius’ attitude to tolerance on the basis of his irenical activities and writings in 1642–1645. Albert Kubišta considers not only the theoretical background of the Jesuit polemics against the Unitas Fratrum around 1600, but also provides brief citations to characterise the style of their theological arguments. By conceiving the Meditations as a literary work and by analysing the role of scepsis within, Petr Glombíček argues against the common opinion that Descartes’ philosophical system in fact emerges from scepticism itself. Olga Fejtová analyses the character of the burgher readership in seventeenth-century Nuremberg and its relationship to the high level of local print production, the system of education in the city, and its rich cultural life – including one of the largest city libraries in the German-speaking world. Marie Kyralová puts forth Jan Amos Comenius’ first report on the fire of Leszno in April 1656. Anežka Baďurová reports on an unfinished bibliographical project of the works of Comenius printed before 1800. Katalin Németh reports on the recent Hungarian Comenius research. 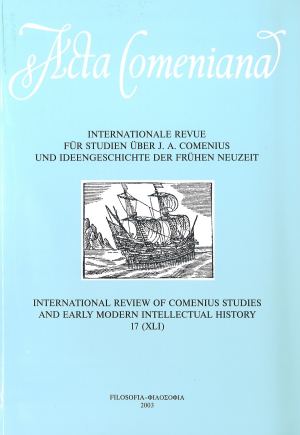