The volume of Acta Comeniana 19 (XLIII) comprises six articles devoted to the intellectual history and history of philosophy of the seventeenth century. The volume also presents an article by Michaela Tydlitátová on so far unknown Comeniana from the library of the Masaryk Institute of the Czech Academy of Sciences and an edition of an unknown document on Comenius’ finances and on his relationship with Ladislav Velen from Žerotín prepared by Tomáš Havelka and Miloš Sládek. The volume includes an extensive review section and also obituaries of Teruo Fujita, Jan Lehár and Daniel A. Neval. The contributions are published in English or German.

Daniel Špelda investigates the influence of Renaissance natural, Neoplatonic and Cabbalistic magic to Francis Bacon. Juan Antonio Sánchez discusses parallel motifs and themes in the works of J. A. Comenius and Baltasar Gracián, particularly in Comenius’ Labyrinth of the World and Paradise of the Heart on one hand and Gracián’s El Criticon on the other. Daniel Heider examines Suárez’ conception of the principle of individuation of accidents and its relationship to the Thomistic solution of the problem. James Hill opposes the “orthodox” interpretation of the term cogitare from Descartes’ Second meditation as having the meaning “to be conscious”; instead, on the basis of a textual analysis, he argues for its primarily intellectual meaning. Petr Dvořák presents the logic and semantics of modal propositions in Juan Caramuel von Lobkowitz, who – although in this author’s opinion not justifiably – adds a modus of freedom to the usual modalities and, interestingly, investigates some relations among selected epistemic and deontological modalities. Jan Palkoska deals with the foundations of Leibniz’ so-called “nominalistic” standpoint, according to which no abstract things (res) exist in the created world. 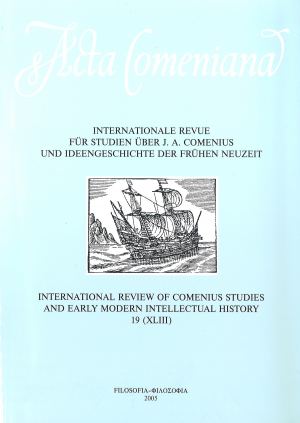