The volume of Acta Comeniana 15–16 (XXXIX–XL) comprises eight articles devoted to the intellectual history and history of thought of the Early Modern Age. Moreover, it puts forth new Comeniological materials and a research report on “Konfessionalisierung”. The volume also contains a number of reviews from Czech, German, English, French, Dutch, Polish, Hungarian, Slovak, and Russian publications on Comenius, cultural history and intellectual history of the Early Modern Period. The contributions are published in English, German or French.

Daniel S. Larangé deals with Comenius’ theory and practice of rhetorics and homiletics. Jean Caravolas uncovers some errors and myths in the existing research on the relation between Comenius’ textbook Janua linguarum and its predecessor written by the Irish Jesuits. Daniel Neval puts Comenius’ view on the Lord’s Supper into the context of three traditions: the Brethren, protestant orthodoxy and early pietism. Markku Leinonen reflects on and deals critically with the master thesis De physica Mosaica Comeniana of the Swedish student Anders Lundborn, defended in June 1753 at the Academy of Turku in Finland. István Monok examines the phenomenon of court libraries in the Carpatian Basin in the 16th–17th centuries, presenting the history of individual family collections such as those of Batthyány, Thurzó, Rákóczi, Nádasdy, Esterházy, Bethlen, Teleki and Apafi families. Using the early modern idealisations of the New World as an explorative and interpretative tool, Markéta Křížová compares the notions of an ideal society/state as present in the social-critical and “utopian” thinking of the Society of Jesus with those of the renewed Unity of Brethren. Jaroslava Hausenblasová examines the Bohemian contacts and activities of the Paracelsian physician and alchemist Oswald Croll (ca. 1560–1608) and calls him a founder of a new science: medical chemistry. Jana Hubková deals with the late works of the south Bohemian poet Šimon Lomnický of Budeč, traces the change in Lomnický’s view of political events, and doubts his alleged authorship of the anonymous broadsheet Exekuce.

In the materials section, Jindřich Halama provides information on a hitherto unknown old edition of a writing penned by the Unity of Brethren. Martin Steiner presents a glossary of terms used by Comenius in Physicae synopsis. Jan Kvapil reports his discovery of a previously unknown first German translation of the Labyrinth of the World and the Paradise of the Heart. Furthermore, he presents an edition of a German Baroque sermon on St. Wenceslas. Lenka Bártová deals with the early modern French editions of Comenius writings. An overview of the recent research on confessionalization was prepared by Anna Ohlidal.

The book has been sold out. 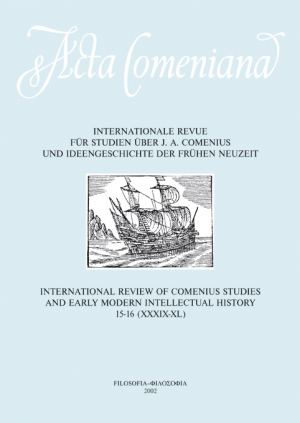