The volume of Acta Comeniana 18 (XLII) comprises five articles devoted to the intellectual history and history of philosophy of the seventeenth century and, moreover, puts forth newly discovered (both primary and secondary) Comeniological sources. The volume is supplemented by an extensive review section and obituaries of the prominent Comeniologist M. Blekastad and the theologian J. M. Lochman. The contributions are published in English or German.

Lucie Storchová analyses the position of eschatology as a source of ethics in historiography and in the production of editions by the Veleslavín circle. Ivo Purš attempts to determine the place of the late Humanist physician and natural scientist Anselmus Boetius de Boodt (1550–1632) in the context of the Rudolphine knowledge. Using the example of Hungary during and after Comenius’ stay there (and especially the case of the Croatian noble Miklós Zrínyi and his propagation in England), Levente Nagy describes the intellectual and political ideology in the middle of the seventeenth century. Petr Glombíček examines René Descartes’ view of language, particularly his ironical critique of universal language projects in the well-known letter to Marin Mersenne (1629). Erwin Schadel explores some significant trends in Comeniology, particularly those which – in the field of purely universal doxography – attempt to comment on the completeness of Comenius’ thinking and its possible universal application. Gábor Kármán presents new, previously unknown correspondence from the Riksarkivet (Stockholm) concerning Comenius and Sweden in 1655–1656. Věra Schifferová presents and comments Comeniana from the correspondence of Dietrich Mahnke and Dmitrij Tschižewskij (1935). 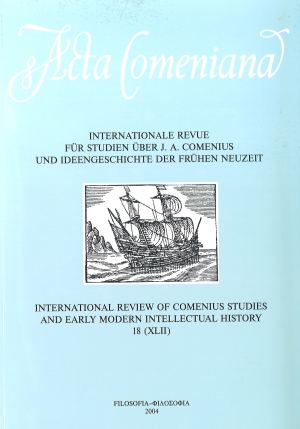