The volume of Acta Comeniana 20–21 (XLIV–XLV) contains four articles devoted to history of philosophy and to the issue of religious exile and missions in the sixteenth, seventeenth and eighteenth centuries. Furthermore, the volume includes the section of contributions from the Czech-Spanish Symposium (co-organized by the Institute of Philosophy of the Czech Academy of Sciences), which concentrates on the topic of J. A. Comenius’ relation to the Spanish and French cultural tradition. The volume is complemented by an extensive review section. The texts are published in English, German or French.

Tomáš Nejeschleba examines Johannes Jessenius’ notion of method, which he argues is not the method of the Paduan Aristotelians, whose student Jessenius is considered to be. Edita Štěříková investigates religious stance, orientation and self-identification of Bohemian and Moravian émigrés in German lands in the eighteenth century, especially their main difference from Lutheranism: the inherited tradition of Unitas fratrum. Eva Kowalská deals with Hungarian émigrés in the seventeenth century and shows their diversity, using the examples of Daniel Klesch, Andreas Günther and Georg Láni. Markéta Křížová focuses on the restitution of slavery in the New World and places this phenomenon within the frame of the intellectual history of Europe, and especially within the frame of the early modern social-reformist, “utopian” thinking. Jolanta Dworzaczkowa reacts to Gábor Kármán’s discovery of the correspondence between J. A. Comenius and J. N. Lilienström, which was published in Acta Comeniana 18 (XLII), and sets the texts in their period context. Jaroslava Kašparová presents an overview of twentieth-century French research on the cultural history of reading and its reception in the Czech Republic.

In the conference section, Simona Binková documents, describes and explains the heyday of Spanish in the Czech lands in the sixteenth and seventeenth centuries. Joan Lluís Llinàs Begon relates the philosophical and pedagogical ideas of Montaigne and Comenius in the context of the origins of modern thought. Anna Mištinová compares and relates Juan Luis Vives (1492–1540) and Jan Amos Comenius (1592–1670) in terms of their philosophical and educational reform ideas. Jiří Beneš explains their agreement in pedagogy by a direct inspiration, their agreement in peace efforts, on the other hand, by the common biblical starting points and similar personal experiences of war. Martin Steiner examines Comenius’ inspiration by the Hybernian Janua lingvarum, originally published in Salamanca and later by Isaac Habrecht, and documents its original and very radical transformation by Comenius for the sake of his own textbook. Nieves Rupérez Almajano and Ana Castro Santamaría undertake a study of the Colegio de los Irlandeses, the possible place of origin of the Hybernian Janua in Salamanca, to show what the life of this College was like from its foundation in 1592 until its move to the Jesuits’ building around 1770. 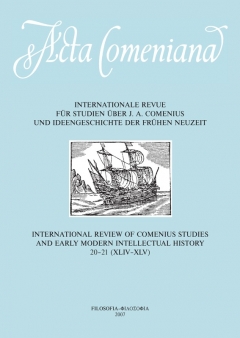