Proceedings of the Symposium

The idea for annual symposium LOGICA where philosophers, mathematics, linguists and logicians had met was hatched in 1987. Part of the original idea was to moderate the tension between philosophers and mathematicians over logical issues. Nowadays Logica symposiums represent an interdisciplinary platform for discussion on all relevant aspects among both internationally renowned scholars and young researchers all over the world.
This volume became from the 7th International Symposium Logica ´93 organized by the Department of Logic of the Institute od Philosophy of ASCR at Libice Castle, Czech Republic, from 1st to 4th June 1993. Also included a supplement from previous symposium Logica ´92. It consists of two papers which, for technical reasons, were omitted from the Proceedings of the Symposium Logica ´92.
Published texts of researchers from european countries, and the United States too, for example refer about generalized quantifiers, vagueness without tolerance, Du Pont´s paradox, role of calibration in inductive logic or about truth in science. 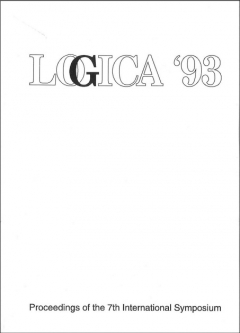