The volume of Acta Comeniana 22–23 (XLVI–XLVII) comprises eight studies with the recent results of research on early modern intellectual history and history of philosophy. The volume is supplemented by more than a hundred-page review section. The contributions are published in English, German, or French.

Martin Žemla provides a detailed intellectual analysis of Theologia Deutsch, an anonymous work of ‘German mysticism’ dating to the turn of the 15th century. Antonín Kostlán analyses the album amicorum of the Moravian Calvinist Jan Opsimathes (c. 1568–after 1620) and also offers new information on his life. Jiří Hrbek describes the life and work of the Swiss humanist and jurist Melchior Goldast of Haiminsfeld (1578–1635). Klaus Schaller analyses Jan Amos Comenius’ solution of the question whether virtue can be taught. Lucie Storchová puts forth an analysis of the textual narrative mode, the argumentative strategy and the polemical context of De origine Bohemorum et Slavorum by Johannes Matthias à Sudetis, of which she also brings edition. Sylva Dobalová deals with a newly discovered document, which was found in the holdings of the Herzog August Bibliothek Wolfenbüttel, describing the festivity Phasma Dionysiacum Pragense (1617). Jiří Just informs about the discovery of Matouš Konečný’s Archives in Mladá Boleslav (2006) and summarises the actual results and future prospects of its research. On the basis of a document discovered in the Matouš Konečný’s Archive, Martin Steiner presents the edition of an evaluation (1611) of five Czech students at the Herborn Academy (including Comenius), as written by its seven professors (including Alsted) on the request of the head of the Academy, Johannes Piscator. 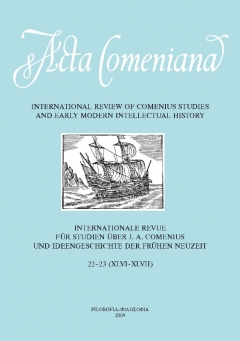