Stanislav Sousedík deals with the political thinking of Jan Jessenius and calls him the ideologist of the Bohemian revolt 1618–1620. Guido Giglioni puts forth an interpretation of some seventeenth-century doctrines of universal animation. Käte Meyer-Drawe, using the well-known mechanical metaphorics, presents and contextualizes the claim of René Descartes for a thinking as precise as a clockwork. Vladimír Urbánek deals with the so far neglected issue of Comenius’ political theory: his criticism of the Machiavellian political-philosophical principles. Mark Greengrass investigates the question of the financing of Comenius’ activities in the years 1637–1641. Antonín Kostlán examines the spread of the Antitrinitarian heterodoxy of Arianism in the Bohemian society before the Thirty Years’ war. Slavomír Wollman deals with the works and ideas of Dmitro Tschižewskij in the context of the discipline known as comparative literature. Jiří Beneš puts forth some new Comeniana from Zürich and Mark Greengrass publishes two manuscripts from the Hartlib papers. 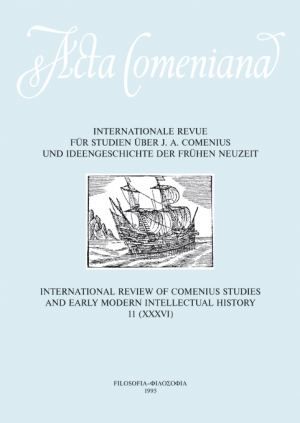